It’s a recurring problem on economic social networks. “Mainstream” is only 9 characters long, therefore much used on twitter, blogs or facebook as a shortcut for what economists working at leading institutions and publishing in leading journals find acceptable. There is considerable agreement that this sociological definition of “mainstream” offered by David Colander, Ric Holt and Barkley Rosser aptly reflects the conventional use of the term. After a few moments, though, questions inescapably erupt: how much has the mainstream evolved since the 1930s or the 1980s, is it more pluralistic, more open, or as hopelessly selective and exclusive as a few decades ago? Will it converge toward a new dominating framework? Is that mainstream essentially about methods, mathematization and quantification? Or is it a synonym for neoclassical economics,aka the study of the equilibria arrived at by the interplay of a set of fully-informed forward-looking agents? Or is that neoclassical orthodoxy already obsolete? Is behavioral economics now part of the mainstream ? What about institutional economics, neuroeconomics, evolutionary economics? Can competing empirical methods (structural econometrics vs quasi-experiments) or theories be both part of the mainstream? Is the mainstream defined by its outsiders or insiders? Do all outsiders define mainstream in the same way? In the end, then, there’s always an annoyed discussant trying to close the Pandora box by snapping: “where does that idea of mainstream economics come from, and who got to define it anyway”?

My speculation is that the answer to both questions might be Paul Samuelson.

“Mainstream” is a regular English word that was only gradually used to characterize the core of some sciences after World War two. In economics, with the notable exception of Godwin (1950, “intellectual islands off the mainstream of economic thought”), the term initially characterized ongoing discussions within fields or topics, including welfare, egalitarianism, Marxism, or recent neoclassical theory. In a 1964 challenge article, Ben Seligman wrote “about part time dissenters from the mainstream such as John Kenneth Galbraith and Gardner Means,” and also used the river metaphor in a history of thought textbook on the Main Currents in Modern Economic Thought, published the previous year.

Seligman was not alone in identifying various streams in economics and viewing one as increasingly dominant in economics as a whole. Paul Samuelson, like Joseph Schumpeter or Georges Stigler, was one of these renown figures who had substantially written on past economists’ ideas, classifying them in schools of thoughts. But he did more than just write a series of History of Economic Thought (HET) articles. A vehicle whereby he was putting order to the theoretical thoughts and empirical and policy practices he was living through, and largely producing, was his best-selling textbook Economics. Initially published 1948, it was revised every three years.

In the 4 th edition, published 1948, he introduced a family tree on the back cover, one that traced the genealogy of the “neoclassical synthesis” he had christened in the previous edition to Keynes and Marshall (image below). The approach to policy he had developed was indeed to be interpreted as an integration of Keynesian economics and traditional theory of prices, though the term went on to live a life of its own as the characterization of the methodological orthodoxy from the 1970s onward. In a recent research note, Roger Backhouse relates how, in the context of growing skepticism toward Keynesian theory, Samuelson re-labelled his neoclassical synthesis box “New Economics” in 1970. The concept, which related to John Kennedy’s counter-cyclical fiscal policy, had been introduced in the previous edition. 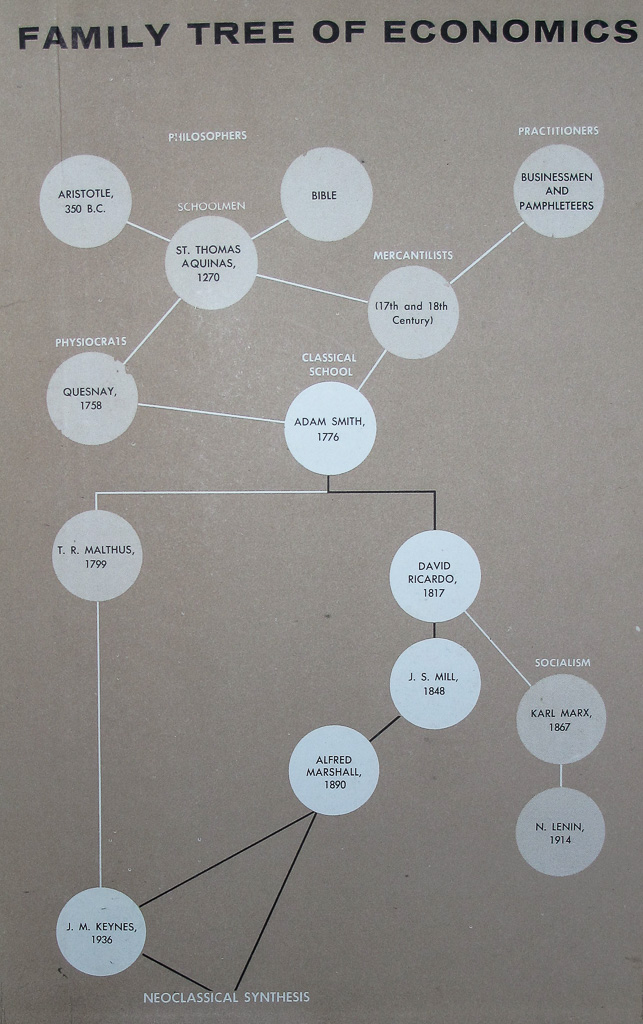 The next edition brought greater changes. A whole chapter on the “evolution of economic doctrines” was introduced, with one section titled “mainstream economics” covering mathematical economics, econometrics, national income accounting among others. In those paragraph, he explained that the approach was already dominant in the US and Scandinavia, and gaining traction in other countries. In the new associated tree, Walras has been introduced alongside Marshall to form neoclassical economics, and its descent with Keynes was now called “Post-Keynes Mainstream Economics.” 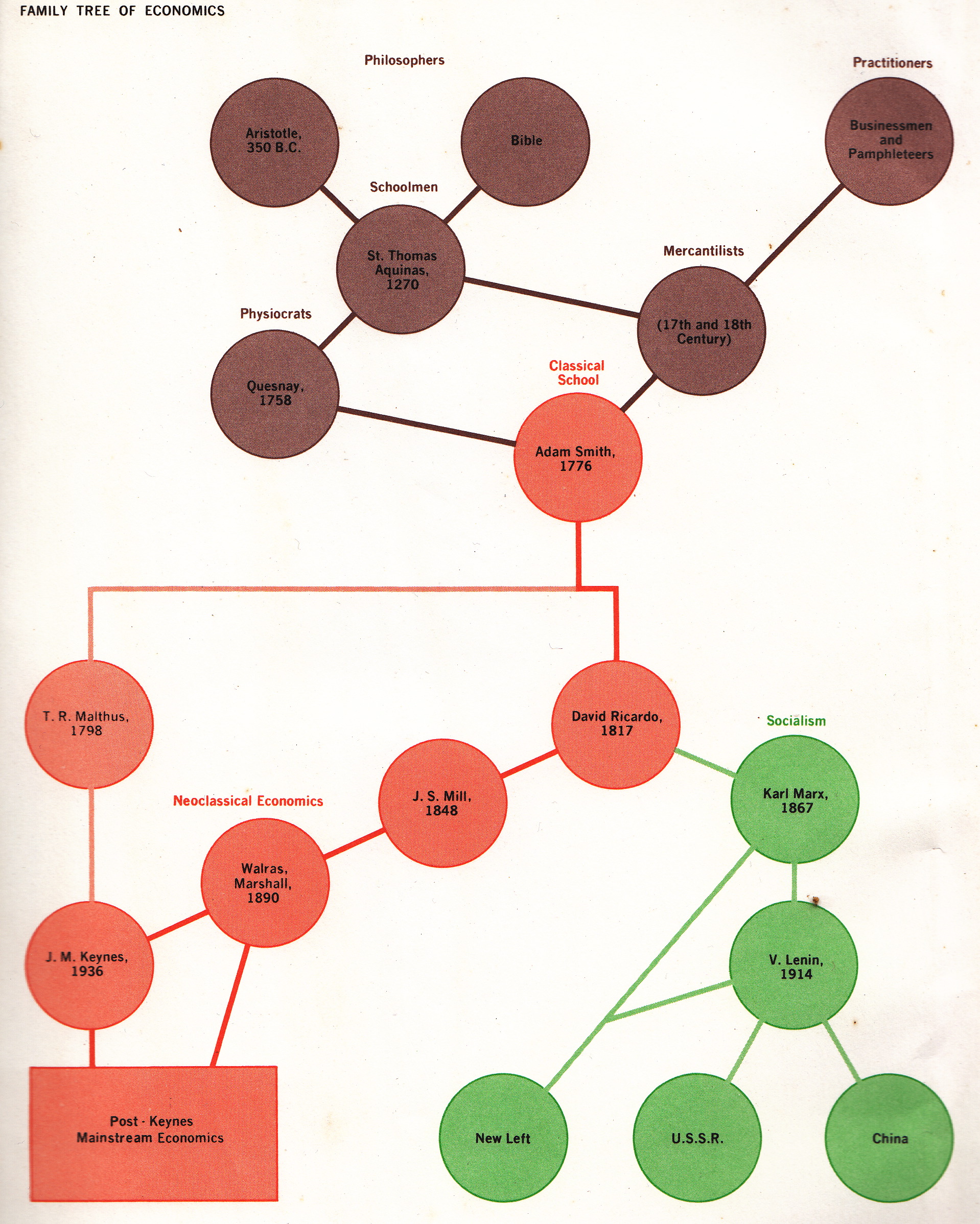 It was in 1985, in the first edition Samuelson coauthored with Nordhaus, that the 1976 tree was again relifted, with the previous label replaced with “Modern Mainstream Economics” (see below). 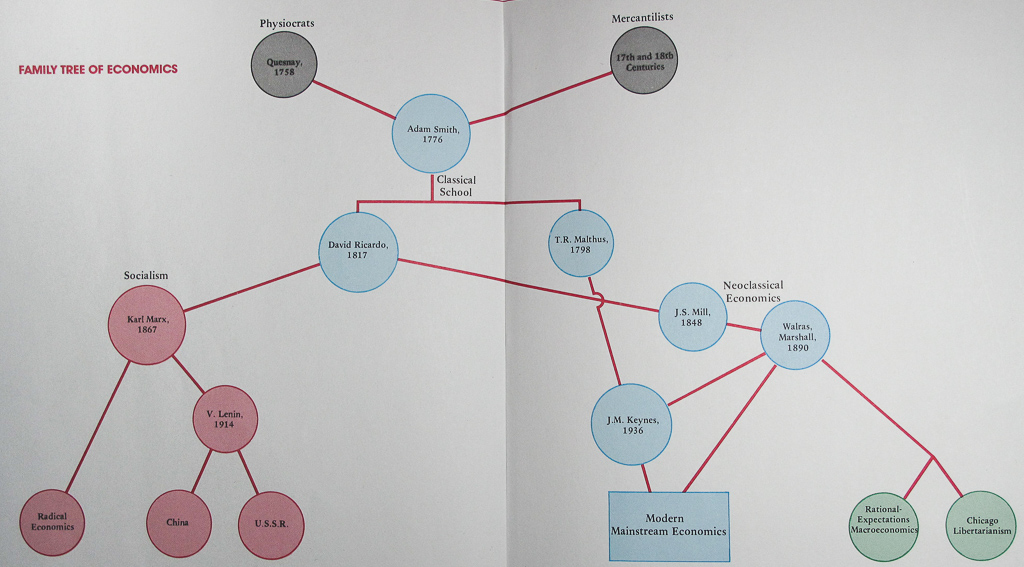 The mid-sixties was the moment the term “mainstream” took off in economics as in some other disciplines. It was also a period of fierce intellectual battles, with a convergence toward a dominant approach to economics problems, and a correlative fragmentation, and an exclusion and institutional organization of dissenters. 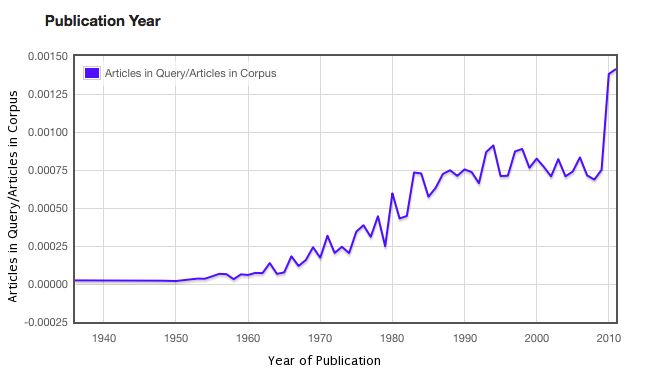 These battles within economics were reflected through battles within Economics. According to Yann Giraud, Samuelson’s textbook was challenged from its first edition onward. Even before going to press, it met the rising tension surrounding all things vaguely identifiable with socialism, and pressures from members of the MIT Corporation to prevent its publication. In his work in progress, Giraud explains that, in an ironical twist of fate, by the late 1960s Economics was perceived as a right-wing textbook by younger radical economists. Giraud describes Samuelson’s attempt to accommodate criticisms that his emphasis on price and income determination neglected issues of class struggles and capitalist exploitation. He devoted growing section of the book, in particular half of his HET chapter, to Marxism, with the purpose of showing its inconsistency and convincing the reader that his approach adequately dealt with the issues raised by the radicals. The chapter also placed the “mainstream” vis-à-vis the New Left, Chicago economics, and Austrians.

The transformations of his family tree reflected this embattled context. The Socialismlineage grew at the same pace the Neoclassical, with a New Left growing out of Marx and Lenin in 1973, at the moment the word mainstream entered the diagram. By 1985, the Socialism and Neoclassical Economics had grown visually further apart, with China and USSR the children of Lenin and a newcomer, Radical Economics deriving from Marx. The introduction of Modern Mainstream Economics therefore reflected the now established domination of an approach within economics. Challengers had no opportunity to claim for Keynes heritage. Ironically, other descents of Walras/Marshall included Rational Expectation Macroeconomics, not considered mainstream in Samuelson’s eye, while becoming dominant in the profession.

How much did Samuelson defined “mainstream economics”? 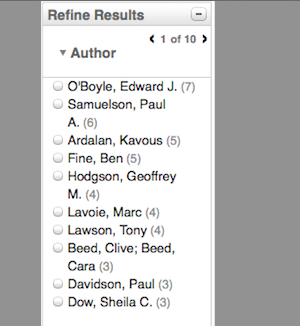 Though routinely used on econ social networks, in print words like “neoclassical,” “orthodox” or “mainstream” are overwhelmingly used by opponents/outsiders/dissenters/heterodox economists. Several works have described how the latter have endorsed those terms to name, thus identify and delineate the enemy, and thereby shape a distinct identity. EconLit stats shows that of the 10 economists who most used the term “mainstream” in the titles and abstracts of their articles between 1960 and 2006, two only are not heterodox researchers.

And the first of these is Samuelson. Of course, my claim that Samuelson’s textbook exerted an influence on economists’ identification and definition of a “mainstream,” and visualization of the genealogy of economic ideas in terms of family trees is highly speculative. The standard way to track influence is through citation analysis, and historians have yet to come with a clever natural experiment for the case in which influence is not channeled via explicit references. How much the family trees owed to Samuelson, Nordhaus, and McGraw Hill is also unclear. And other famous mainstream economists in these years, Solow, Arrow or others affiliated with Harvard, then considered the epitome of mainstream, and other textbooks may have played an equally important influence in the identification, definition and representation of mainstream. Or maybe mainstream economics became mainstream by virtue of its increased used by those dissenters who were building a common identity. But that Samuelson prominently used the word mainstream, not only in Economics and article, but also in conferences and correspondence, that he sold a then thousands of copies of a textbook that was used in most major universities, and that economists are still sticking with family tree of their ancestors calls for further research