On Monday, if I make it through strikes, river floods, and tear gas, I’ll be taking a course on the Great Gatsby curve in Rennes. And as I scroll through some articles on the topic, I’m struck by an air of déjà-vu. Though similar curves had been circulated by Miles Corak since 2006, the name was introduced by Alan Krueger, then chairman of the Council of Economic Advisers in a January 2012 address on inequality. Statistics, Krueger argued, show a negative relationship between inequality in the mid-1980s and intergenerational mobility across countries, one he called the “Great Gatsby Curve.”

Both the empirical existence and the theoretical foundations of the Gatsby curve have since been hotly debated within academia. It has been argued that no correlation, even less causation, existed across countries, or across US local labor markets, that the relation disappears when other measures of mobility and inequality are used, and that the examination of intertemporal relationships has yielded mixed results. The curve has also garnered public attention, with mentions in The Economist or by social mobility activists. Most prominently, Barack Obama, who had already argued that greater inequality would lead to lesser upward mobility in a 2011 address, used the research in a December 2013 speech on the economy. “In fact, statistics show not only that our levels of income inequality rank near countries like Jamaica and Argentina, but that it is harder today for a child born here in America to improve her station in life than it is for children in most of our wealthy allies,” he explained. However, some commentators opposed the use of such curve in the public debate. The Gatsby Curve is a “simplistic and distracting eye-catching bumper sticker,” they say, one that, in the wake of the Occupy 2011 movement, created a narrative that steers the country in a partisan and sterile redistribution debate. 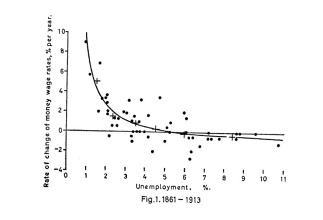 It is much too early to see if the Great Gatsby curve is likely to live a life of its own in academia, policy spheres and public fora. But travelling curves are persistent phenomena in the history of economics. The Phillips curve, for instance, has become a kind of “myth.” Yet, James Forder explains, the story of the discovery of an inverse relationship between the unemployment rate and the rate of wage inflation in the UK by A.W. Phillips in 1958, its subsequent transformation by Samuelson and Solow, its use to back up inflationist policies in the 1960s, its 1970s relifting by Friedman and Phelps, all this is a total scam. The quantification of a wage-employment relation began with Irving Fisher in the 1920s. Samuelson and Solow have subsequently emphasized the risk that it would shift if used for policy-making. There never was a “missing equation” in postwar macro. No trace of the curve is found in the CEA reports before 1970. And the stagflation did not readily hoisted an “anticipation-augmented curve” or a “natural rate of unemployment” on the macro throne. At the onset of the 1970s, “the Philips Curve” became a shorthand for “object of theoretical investigation” for macro theorists, just like “the Phillips curve has shifted” summarized a problem econometricians actively worked on. It is only in economic textbooks from the mid-1970s onward that the curve became an object with a distinct meaning, –the ‘tradeoff’–, and the mythical history above (why and how this stabilization occurred is a story yet to be told).

The journey of the Laffer curve also began with a famous tale. During a 1974 steak dinner with Dick Cheney and Don Rumsfeld, Chicago economist Arthur Laffer argued that too high a marginal tax rate was slowing economic growth, and, to make his point, grabbed a napkin and scribbled the famous bell curve. Four years later, the fourth guest, former Wall Street Journal editorial writer Jude Wanniski, popularized the curve in his supply-side economics tract, The Way the World Works. 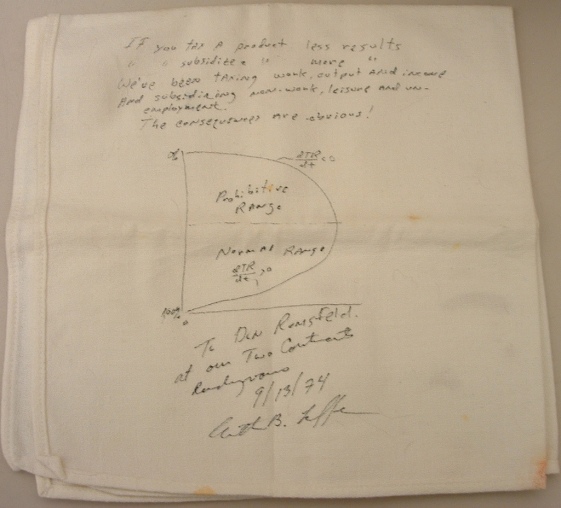 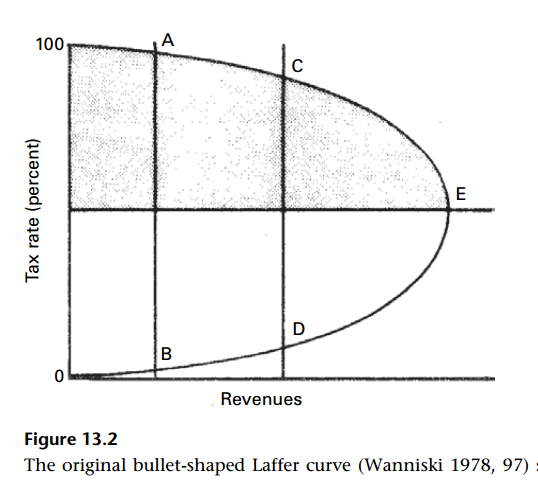 The foundation tale is about all what the Laffer curve had in common with its Phillips counterpart. While the latter was a visual representation of statistical evidence, later thought to reflect a mathematical relationship, the former was not a true curve, merely a visual, an insight, a promise that such empirical or theoretical relation might exist. And, as Yann Giraud relates in his history of the circulation and persistence of the Laffer Curve, its popularization and use in policy circles predated its academicization. The diagram was timely for those supply side Republicans who sense they needed more than the traditional discourse on cutting government spending, and early wielded it to claim that a tax cut would pay for itself and even permit more government spending in the future. 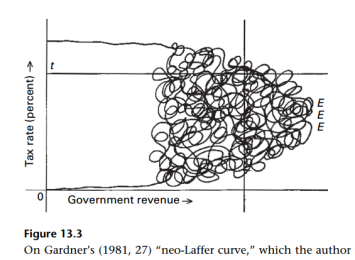 Academic economists only began to address the Laffer curve after the Kemp-Roth tax cuts of 1978 and 1981 had failed to generate growth, to increase public deficits, and had resulted in the slashing of government spending. As other scientists and public intellectuals, such as Martin Gardner, increasingly mocked the whole profession for the ideas embodied in the Laffer curve, Don Fullerton and James Buchanan and Dwight Lee provided analytical models and estimations of the shape of the curve for various tax rates. None of them found that actual tax rates were high enough to discourage taxpayers from offering more factors. Economists then moved from testing the Laffer curve to studying the consequences of tax cuts (Feldstein vs Goolsbee), but by that time, Giraud notes, policy-makers had already made the curve asymmetrical, then largely relinquished it. It is unclear that academic proofs had any influence in that evolution.

Edit 1: see also Elisabeth Berman and Laura Milanes-Reyes’s quantitative survey of the uses of the Laffer Curve by Democrats vs Republicans at the US congress. They show that both  Democrats and and Republicans initially used the Laffer Curve as a “knowledge claim,” a theory of taxation to be debated with help of experts. Yet, after a period of transition, the Democrats came to use the Laffer Curve as “part of an ironic political narrative about failure of the Reagan administration.” Their paper illustrates how “politicization of knowledge” occurs, especially under political polarization (like today). 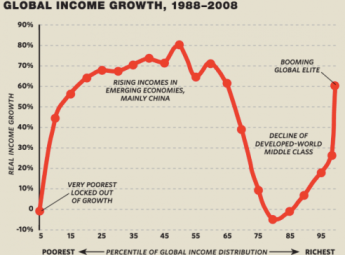 It will be interesting to see how the Great Gatsby curve, born at the frontier of academia and policy, will travel in the decades to come. Edit 2: I wrote this article in Spring 2016. Since then, two other curves have made headlines: Branko Milanovic’s “Elephant Curve,” which charts the real income growth of world citizens and shows who the winners (a global middle class and a global plutocracy) and the losers (rich countries’ middle classes) in the globalization game are; and more recently, Thomas Piketty, Emmanuel Saez and Gabriel Zucman’s chart of annual income growth in the US, represented by income percentile and amended and animated by David Lehonardt and the NYT graphics team. It shows how exclusively the very affluent have benefited from growth in the last decades. The former has already been christened by social media, the latter has so far been called the most important chart of the decade (as the elephant curve last year). Like some of the other curves mentioned in that post, they are simple, striking, and suggest that new economic  research circulate better- and might have more impact- when associated with the clever visualization of a stylized fact. Dan Hirschman has recently published a sociological reflection on these empirical regularities in search of a causal explanation, and has emphasized how well they travel in the political arena. 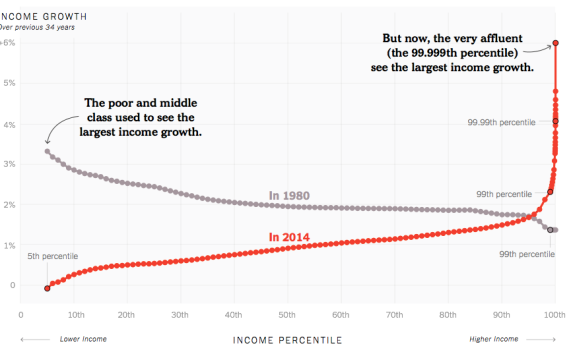